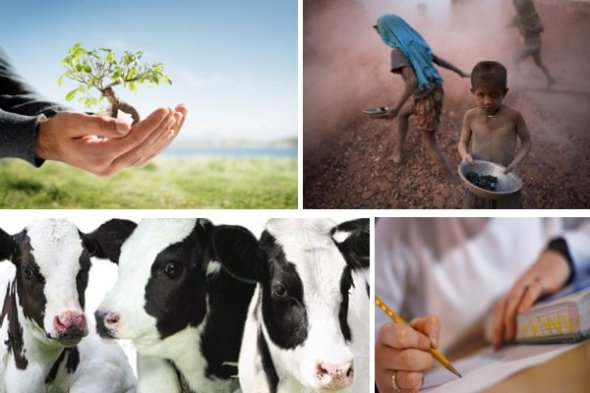 My initial reason for going vegan, after learning about all hormones that are pumped into the chickens  and fish, was for health reasons. (I rarely ate red meat!) As I have mentioned in an earlier post, my close friend just passed away from metastatic breast cancer and because of her I started doing more research into health, healing and diet.

However, now that I learned the truth about how horrific the chickens, pigs, cows and calves are treated and the disgusting things they are fed, I think that health & no longer wanting to contribute to the cruel treatment of animals are up there side by side!

Listen to this, “According to the Humane Society of the United States, if every American reduced his or her meat consumption by just 10 percent that would be enough to save roughly 1 billion animals from miserable lives annually.” (Veganist by Kathy Freston)

Even if you choose to only go the vegetarian route, trust me, I would applaud you & do a happy dance, Kathy Freston points out in her book “Veganist” that, “By going vegetarian you will save three acres of land, save 2,700 pounds of soil from erosion, and save 95,000 gallons of water every year, year after year.”

Further, “Even if Americans reduced our meat consumption by 5 percent (eating approximately one fewer meat dish per week), that would free up 7.5 million tons of grain, enough to feed the 25 million Americans who go hungry each day.”

I know for a fact that we are all either part of the problem or the solution! The choice is always a personal one! I decided that I could go on eating the way I had, in complete oblivion, or I could face the hard facts about what I was putting in my body, as well as take responsibility for my role in the interconnectedness of preserving our beautiful planet and the well being of all animals!

Urbanveganchic by https://urbanveganchic.com/ is licensed under a Creative Commons Attribution-NonCommercial-NoDerivs 3.0 Unported License.

"The Way We Eat: Why Our Food Choices Matter" by Peter Singer

“Let food be thy medicine and medicine be thy food” ~Hippocrates

Sharing knowledge so you can make choices according to your own values.

Can our DNA be "Played" like a musical instrument?